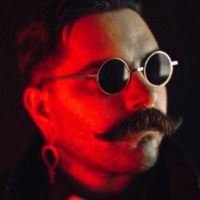 “May The Darkness Be With You”
THE wayfaring stranger: the Dark Reverend VAN TASTIK has had a film-worthy life.
He’s lived in 6 countries, speaks 7 languages (yes 7), he’s appeared on the BBC, Sniester Rock Festival and Eden Festival.

VAN TASTIK’s music is simultaneously melancholy and energetic with a “voice that evokes energy from the first note”.
At his performances, he connects his audience through his authenticity, music and humour.